The University of Corsica affirms that creativity is an important vector for regional development. Naming a special project leader responsible for creative initiatives encourages momentum, as does the configuration of an “Innovation and Development” Center. This is associated with a Designer in Residency Program and an open-access Fab Lab. These activities and programs should put Corsica on the map of world-class design.

A Fab Lab is a place to produce “just about everything” using digital and analog machines. Located in the historical National Palace of Corte, the Fab Lab is an exceptional tool in terms of innovation, creativity and production, for the academic community, the Corsican productive base and the public in general. The Fab Lab Corti is open to all.

The University intends to democratize the techniques of digital manufacturing, and appropriate technology on an individual level, and to favor learning and innovation “horizontally” from person to person. The stakes are high. Solving local problems with local know-how and local answers contribute to returning to a productive economy. The Fab Lab ideal is based on innovation, open source, and equality access and the Fab Lab Corti is no exception.

Created in 2014, the artists’ and designers’ residence “Fabbrica Design” focuses on design production in Corsica. Exploring regionally specific resources, the uses and potential of indigenous materials are pooled to encourage possibilities.

A circular economy and its related issues are of basic concern. Self-operating production from local resources and local technical capacities intend to refocus thinking on a personal level, to design, produce, and relocate activities regionally.

The prototypes developed during the residence are functional, and subject to publicity. In close collaboration with the scientific and academic community of the University, art and creation can be analyzed and coded. The University of Corsica’s In Residency Program is connected to all the open source design resources through the worldwide Fab Lab network.

For the “Fundamental” project, the designer, Sébastien Cordoleani, imagined more than twenty objects, using wood as the single raw material.

“Fundamental” is a total design project, encompassing every aspect, from the production line to the final objects, even defining the terms and conditions for marketing and distribution.

In partnership with the Corsican Interprofessional Timber Organization “Legnu Vivu”, the residency’s objective was to create a series of objects, such as household accessories or components of furniture. Some of the production was shown during the well-known International bi-annual Design Show in Saint-Etienne, 2015, but the main concern was that for the designs to be producible and useable.

“Suveru Corsu” is a fresh look at Corsican cork, a substance in plentiful supply, but largely underexploited locally. Ranging from one-of-a-kind pieces to mass-produced units, the prototypes’ fabrication was interested in developing cork’s flexibility, insulating, acoustical, and thermal potential.

After focusing on wood and cork, Fabbrica Design’s third residency will focus on CLAY (as seen in its larger context: earth, soil, ground, porcelain, fire ware, adobe…). Pauline Avrillon was chosen for her innovative propositions, experimentation and fresh look at questions relating to materials and craftsmanship in Corsica. Her project “Down to Earth” includes partnerships with local craftsmen and the Fab Lab Corti.

With Pauline Bailey and Hugo Poirier

The Film and Audiovisual (Broadcasting) Department.

The movies made by the Film and Audiovisual Department of the University of Corsica are regularly selected by national and international festivals; they promote Corsican culture and contemporary production internationally. The IUT (University Institute of Technology) offers 2 study programs.

The professional technological degree in Sound and Picture Engineering train technicians in the transmission of sound, image, production and technical management, as well as direction in the entire audiovisual domain. The classes cover preparation, shooting and post-production by direct practical experience. In their studies, students make documentaries, fictional movies, and commissioned films.

The University Diploma “Creation in Film and Audiovisual Technology in Corsica” (Créations et Techniques Audiovisuelles et Cinématographiques de Corse – CREATACC) is a thorough study program specializing in script writing, producing and realizing fiction and documentary films, in partnership with the GREC (Support Group for Research and Experimentation in Films). Professionals teach 90% of the classes. Every year, twelve novice directors and producers are enrolled in the program, similar to an artist residency.

Bonanova is the literary magazine of the University of Corsica’s Cultural Center’s support association. The contents are available online in the Cultural Multi-Media Library of Corsica and Corsicans to diffuse and promote the work among the general public. Written in Corsican, the bi-annual journal discusses current literary news through essays and excerpts of the works of numerous authors.

Manu & Ciarbellu (Mind and Matter), the workshop of skill and expertise.

In partnership with the Lulìshop, The University of Corsica’s Foundation, proposes a bi-annual workshop entitled “manu and ciarbellu”. An extention of Fabbrica Design, this weeklong seminar convenes a designer and a craftsman. The co-designing of new objects is an opportunity to rethink the evolution of craftsmanship.

A designer based in London, Romain Pascal, and Natalina Figarella, a craftswoman living in Silvarecciu, were able to share their skills in 2016, and enrich traditional basketry by experimenting with new materials and trying new methods. The results of their combined work were shown in the exhibition “Le patrimoine vivant. Être et transmettre» (Living Heritage. To Be and to Bequeath) at the Museum of Corsica in Corte. 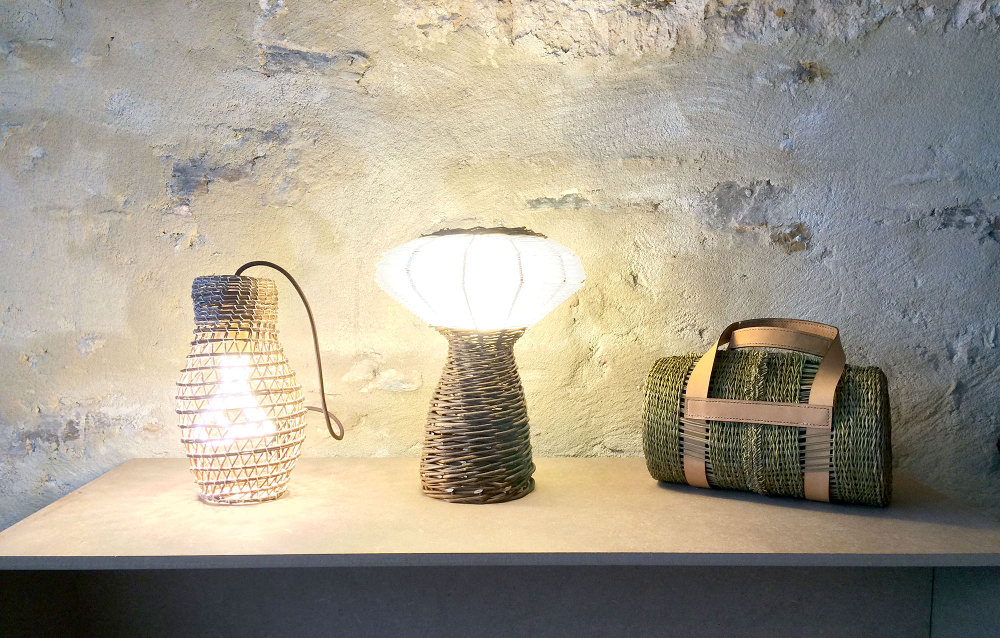